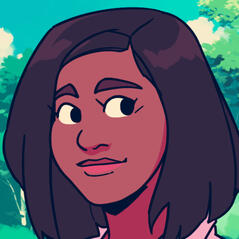 I love writing about gremlins, outcasts, and the slightly unhinged.

I’ve worked in the game industry for five years in a number of different fields. I'm a lead writer and creator of Last Legacy for FictIf. In addition to coming up with the concept and characters, I wrote Felix's route, Sage Chapters 1-7, and the short story Nyacromancy. I’ve also written for other games such as Psychic.

In a past life as a project coordinator at Skybound, I worked on several titles based off of comic properties such as Thief of Thieves.

I'm also a graduate of the mentorship program at Talespinners. You can read about Best Forgotten, the game I created on their blog or play it on itch.io!

More information about my work can be found on LinkedIn.

Hello! My name's Dev (she/her), and I'm a Black writer and narrative designer. Like the best kinds of barbecue, I was born in the south and eventually made my way out west. I moved to LA to pursue a B.A. in Interactive Entertainment at USC. Apparently I couldn't get enough of academia, because I returned to USC for a M.F.A. in Writing for Screen & Television.

My focus is currently on writing narrative games for mobile platforms, but I'm interested in storytelling across various media. I'm excited to see what medium draws my attention next!

Interested in seeing more of my work or just chatting about story and game design? You can find me on Twitter or LinkedIn.